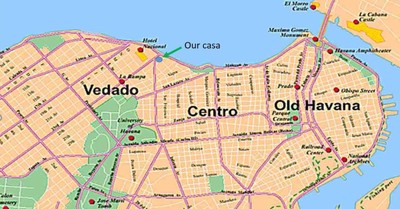 Our only full day in Havana. We've been to Havana before, so we decided on a mix of old favorites and a few new things. We started off with breakfast at Cafe La Esquina in Vedado (near the Trendy Apartamento). 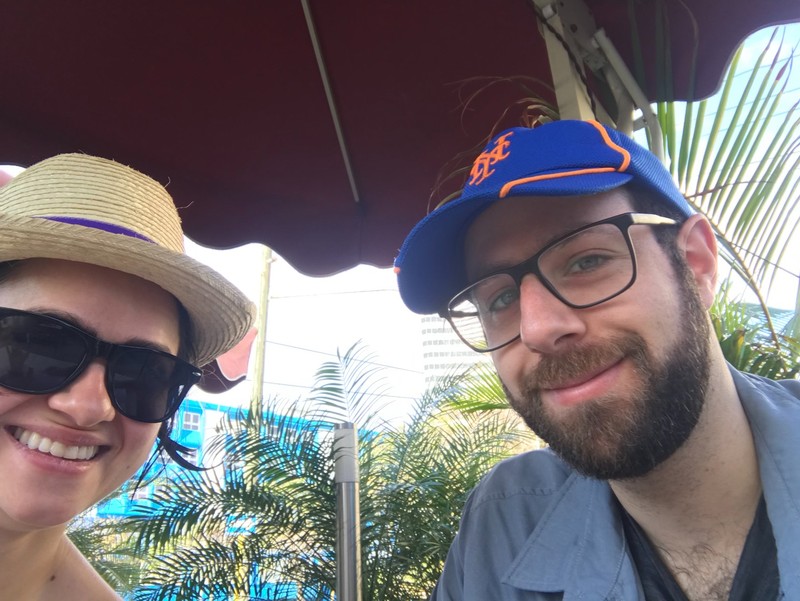 Patricia came to pick up up at the apartamento. We drove around Havana for a little while, stopping at the local synagogue. 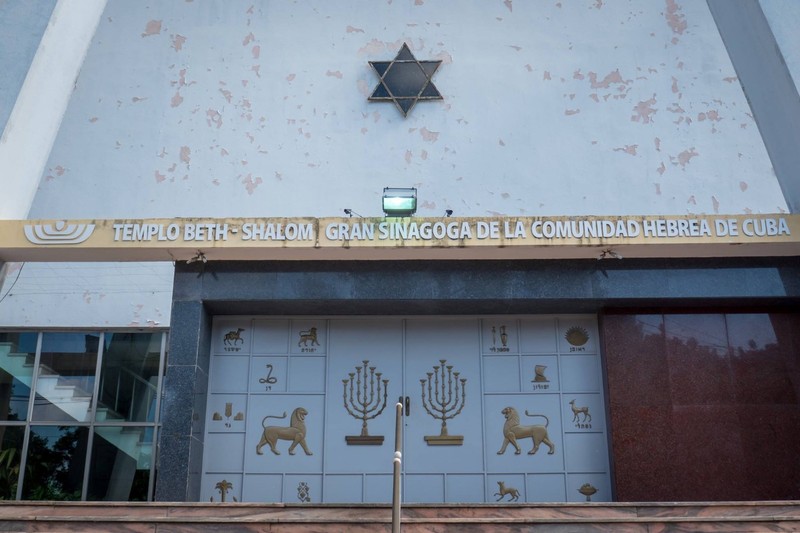 A new cuba sign has been added next to the Malecon. Patry told us it's for the quincentennial of Havana. 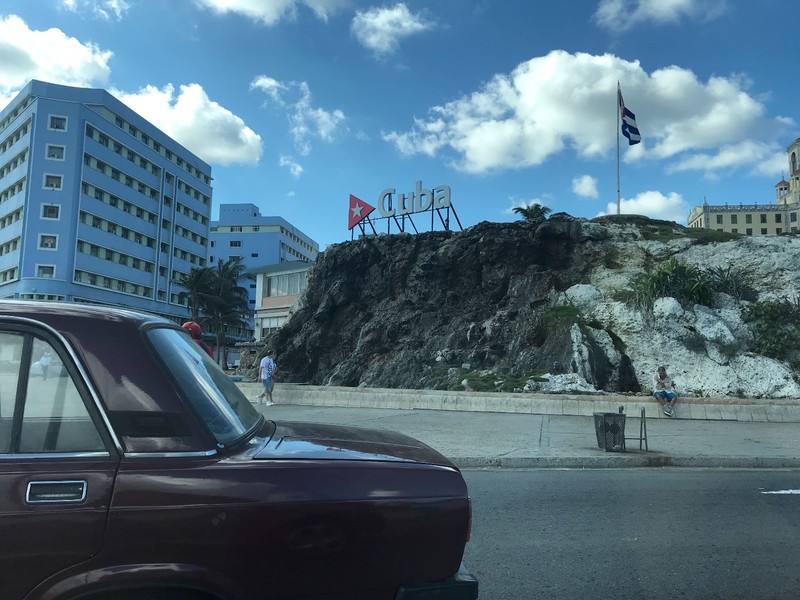 One of the things we do every year is bring a "caja" (box) on behalf of Spanky's Project, an animal rescue organization based in Canada. We drop it off at a pottery studio in Habana Viaja. The caja was filled with important supplies, we also brought some additional supplies. This year the biggest request was for kitten formula. Once we arrived we found out why. 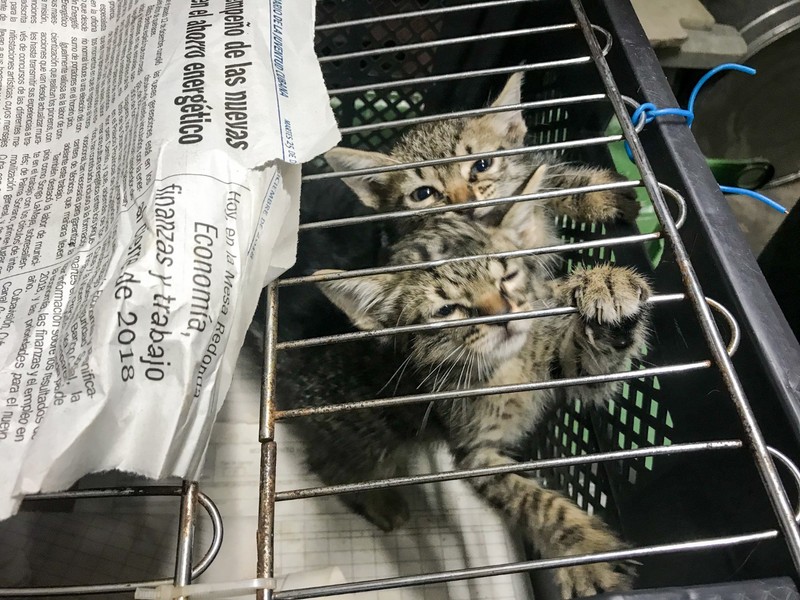 We also visited a firefighter museum in Habana Viaja and saw some stilt walkers in the street. 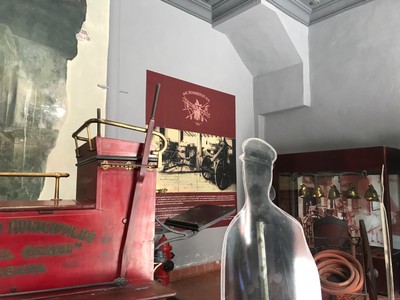 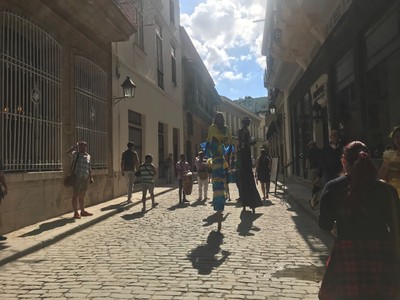 We drove over to Plaza Vieja. We tried to purchase some coffee in bags but we were told it was too late in the day (11:40AM). We wandered across the square to the Camara Oscura, which we had wanted to visit last year. The Camara Oscura is the only one in all of Latin America and the Caribbean . It is a purely mechanical reflection system, projecting a perfect image of all of Havana onto a concave surface. In addition the Oscura is located on a high rooftop, which gave us some pretty incredible views. 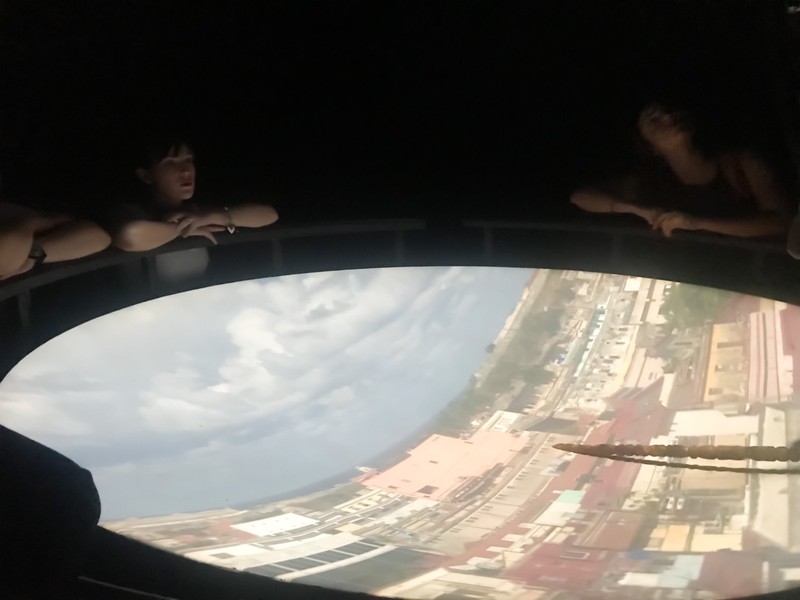 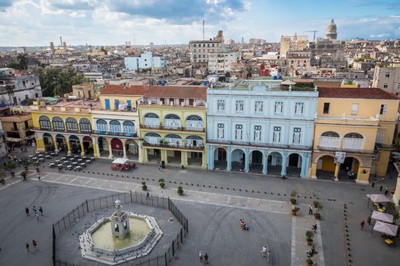 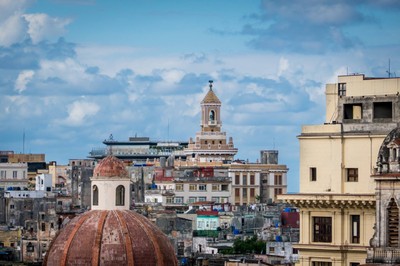 The tour guide at the Camara Oscura had mentioned the Capitolio renovation, and we decided to check it out. The building is still closed, but the steps and entry area are now open, a change from the year before. We were caught in a crazy rainstorm, which gave us plenty of time to check out the elaborate brass relief sculpture on the Capitolio doors. The bronze images of President Machado were scratched off during riots in 1933. 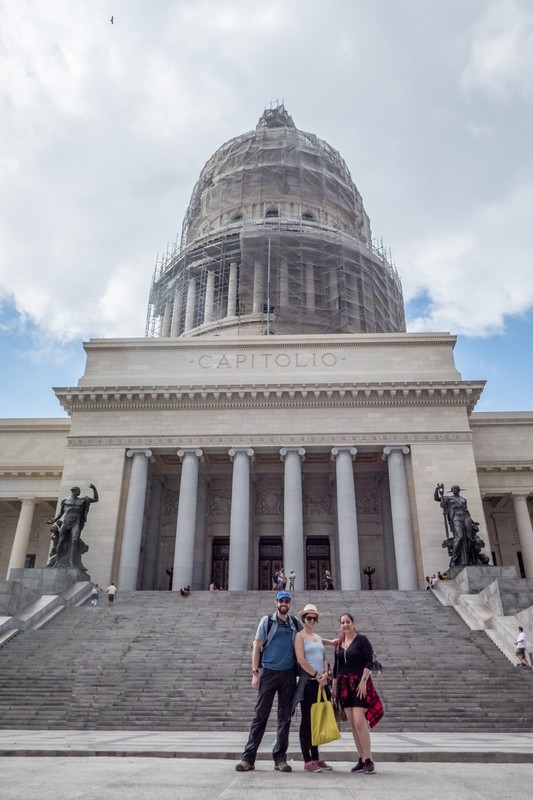 Ytan, Myself and Patricia in front of the Capitolio 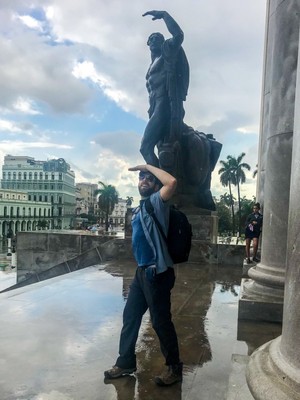 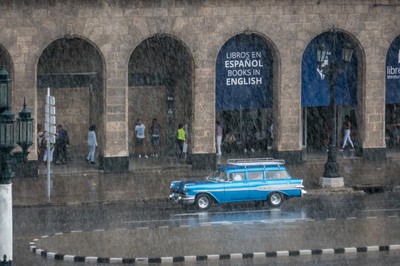 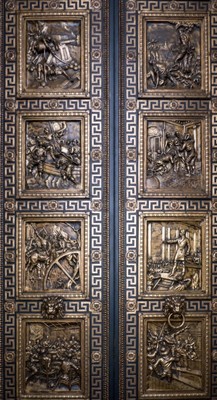 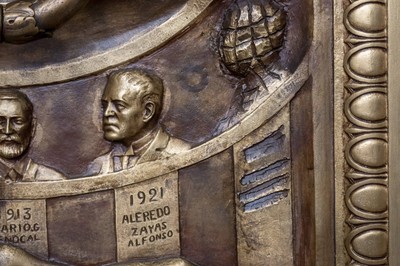 After the rain subsided we head to La Lamparilla, one of our favorite spots in Habana Vieja. It is famous for elaborate daiquiris, although the menu doesn't mention the elaborate piece of art that each daiquiri is. 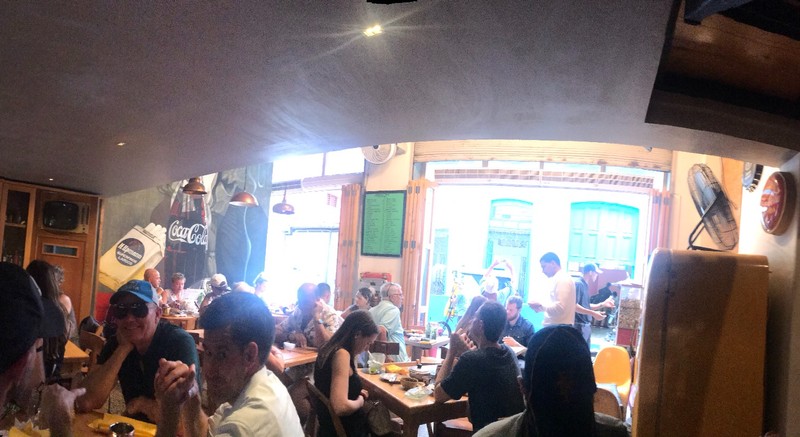 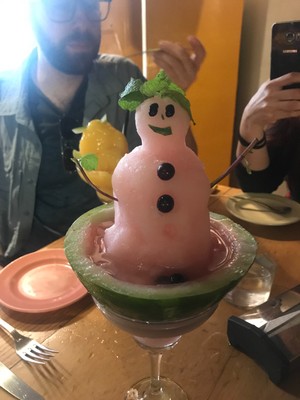 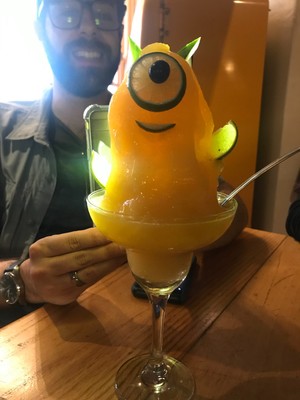 Patricia headed back home to Miramar to help prepare dinner, and we decided to visit the Museo de La Revolucion, mainly because we wanted to see the inside of the Presidential palace. The palace was impressive, but the exhibits were not well maintained, and it was some very obvious propaganda. The outdoor area, with various vehicles from the "revolution" was a little more interesting, although the GranMa yacht was impossible to see through dirty glass. 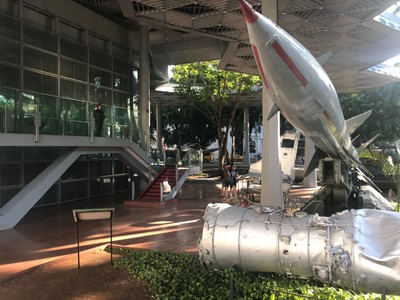 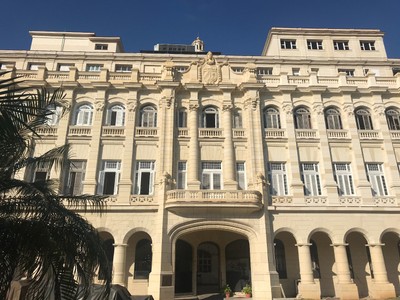 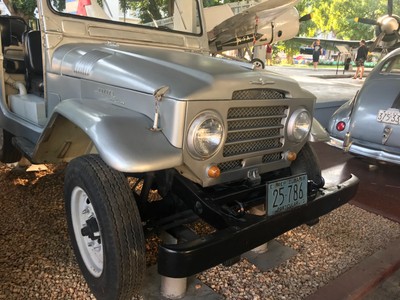 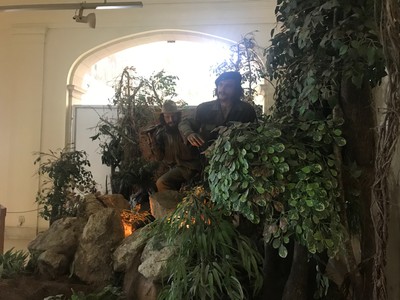 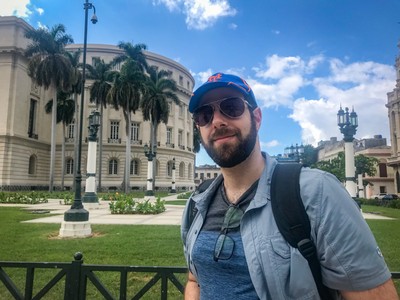 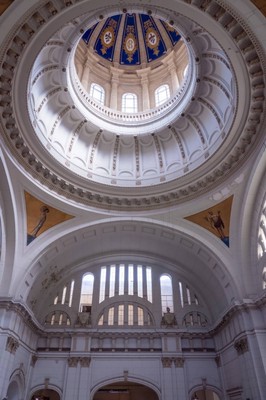 We headed over to Casa Betty for a very delicious dinner, including malanga fritters (our favorite) and mojitos.

After dinner, Patricia invited us to the nightly firing of the cannons at El Murro. We drove over and we were very surprised to see hundreds of cars, all parked festival style on a large lawn. After walking a long way and paying admission, we witnessed the (Very Loud) firing of the cannons from a distance. After the cannon firing, we wandered around El Murro by night, with some beautiful nighttime city views. 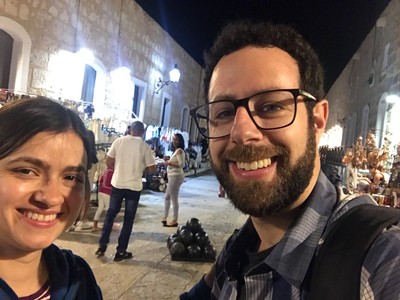 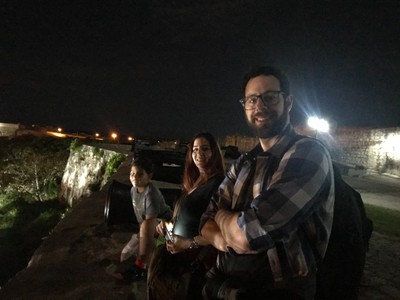 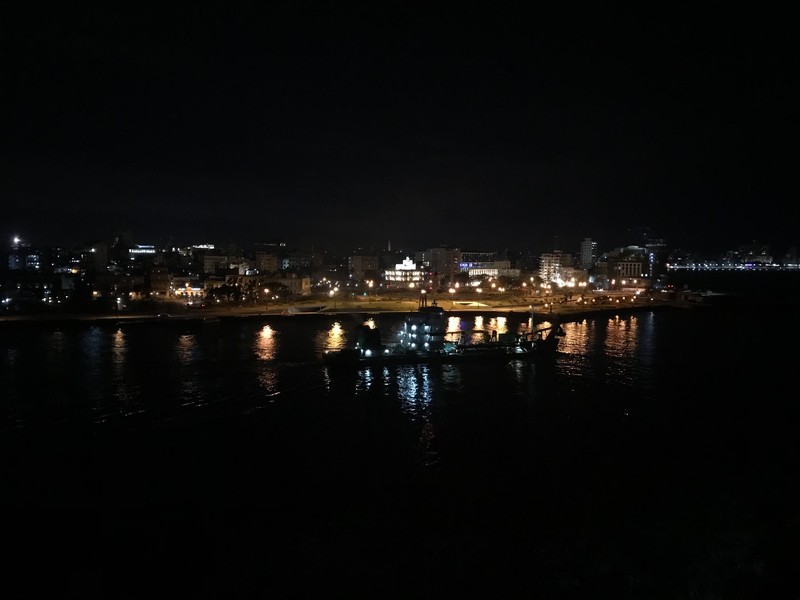 After visiting el Morro, we returned to the Trendy Apartamento for a little bit of sleep before our early start the next morning.

Posted by carolinea 18:57 Archived in Cuba

Previous Next Table of contents

Comments on this blog entry are now closed to non-Travellerspoint members. You can still leave a comment if you are a member of Travellerspoint.

If you aren't a member of Travellerspoint yet, you can join for free.